Verbruggen is best-known as a member of Flat Earth Society, Belgium’s humorously dynamic big band. Dumoulin recently formed The Red Hill Orchestra, with New Yorkers Ellery Eskelin and Dan Weiss. Westerhus has lately been recording solo, or in partnership with fellow Norwegian Sidsel Endresen. Henriksen made his name as a fourth of Norway’s Supersilent, but now concentrates on solo work. 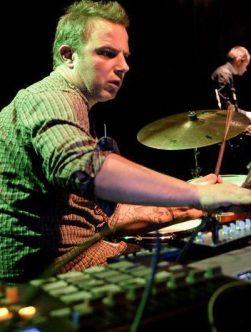 Verbruggen and Dumoulin studied together at the Conservatory in Brussels. “He’s one of my best friends and musical colleagues,” says the drummer. “With whom I play all the time. He’s in almost all of my bands.”

In 2010, Verbruggen began work on a duo album with Henriksen, Black Swan eventually being released in 2012. It took a while for the pair to reunite. Henriksen didn’t want to leave Norway very much, at that time, due to the recent arrival of his children. “So we made a recording via the internet,” Verbruggen relates. “I recorded some free improvisations, and I sent them to him, then he made an album, recording trumpet and all kinds of instruments. He improvised, took a part of it, played on it, let it rest for a while, and then came back to it, and added some synthesisers. He also mixed it.”

Verbruggen began to receive a number of invitations from club and festival promoters, for the duo to continue their teaming. This didn’t come together for a while, until the Brussels Jazz Marathon, when Dumoulin suggested that they also work with Westerhus. Suddenly a quartet concept was born. All together, a mini-tour of four gigs coalesced, followed by a one-off date in Antwerp  last November.

“Arve said ‘no rehearsal, let’s just improvise,” Verbruggen recalls of the first time they performed as a foursome. “We all said hello to each other, and everyone was with their electronics, checking things for a good hour, or an hour and a half, with their headphones on, and all of a sudden, everybody just started playing some sounds, it was really peacefully coming together. Everybody was on his own island, and then this music started growing. It was perfect. A great moment of improvisation…” 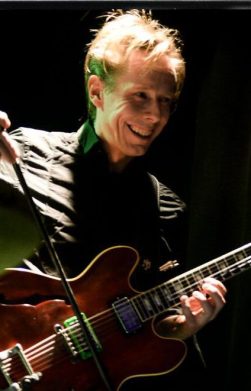 Henriksen might lead the other three players into a softer dusting situation, keeping his trumpet a golden puffball beside the stuttering judders of his bandmates. The natural tendency of Westerhus is to be spikier, but these surroundings coax out a more gently rounded sound from his strings, approaching a Hawaiian slide float. At other times Warped Dreamer plough into a junkyard chatter, piling up the dense oily gush of machine sound. Verbruggen’s muted drum clutter sometimes sounds akin to the tumbling soundscapes of Roger Turner or Paul Lovens. When the tide slips in that direction, they also rip into a scattering spread of hardcore noise-sensitivity, spilling with hyper-control. Westerhus bows, Henriksen glugs, and then suddenly things go quiet again.

Warped Dreamer is an occasional entity, due to the difficulty of its members synchronising their diaries. Verbruggen also believes that this is a positive circumstance, as it ensures that they retain their freshness, their relationship with the unexpected. The Moers Festival will represent the biggest stage that they’ve played on, and it will also act as the album release party for Lomahongva, which will come out on Verbruggen’s own RAT label. This imprint exists primarily to issue the drummer’s own projects, and tends to release three or four albums each year. “I like that it’s in my own hands, and that I also have full control of the sleeve and artwork. Lomahongva is a live recording of last November’s gig. I always record my bands, the sound engineer that tours with us records with Pro Tools. My bands tend to be better live than in the studio. There’s some kind of energy live that’s difficult to grasp in the studio. This time, Stian mixed and mastered.”

I ask Verbruggen about the significance of the album title. Lomahongva means ‘beautiful clouds rising’, in the Native American Hopi language. He’s not completely sure why he chose this, saying that it simply felt right on an instinctive level. “That’s why I like it, though, because it’s difficult to grasp. I have to be just as open-minded when I play, and there can be something poetic happening, and this is why I like such names for this music.”