My scribe was massively impacted by their gig in Birmingham, England, just last November, at the climax of a short European tour. Even though this quartet are fundamentally original, they undeniably possess an overall odour of Ornette Coleman, their democratically-distributed compositions infected by ample outbreaks of scattershot, virtuoso diversions from the theme at hand. Even if extremely wayward, a solo, or simultaneous multi-player ‚group-solo‘, would crack back into the tune with an unholy precision. These four had a.) been rehearsing prodigiously, b.) were tour-honed into brilliance and/or c.) have an innate rapport.

Several months later, I caught up with Petter Eldh during one of his quieter weeks in Berlin, asking him what he anticipates from Amok at Moers. “The concerts we’ve done so far have been in clubs,” he notes. “We’ve played some festivals, but that’s been smaller venues also. With the quartet, I hope we can come across on the big stage, with the energy we have.”

When I witnessed Amok Amor in Birmingham, they were playing in virtually all-acoustic mode, with only Eldh receiving some low-level bass amplification. For the Moersfest set, more powerful speaker stacks await. “Moers is special because it’s so intense,” Eldh continues. “It’s just a line-check, so it’s not until we play the first note that we really know how the sound is going to be. This gives a certain energy”.

The turnaround between sets is rapid at Moers, so artists usually refine their onstage balance, with the sound engineers being well-versed in the art of providing a quickly-enhanced frontal-speaker thrust, rather than a full volume level-check prior to the performance. “That wouldn’t be possible, with the programming, the intensity of the shows going on,” Eldh continues. “So usually it’s only the first band of the day that gets a proper soundcheck. Given the circumstances, that’s something to deal with…”

The roots of Amok Amor lie in the trio of Slavin, Eldh and Lillinger, who released their Starlight debut album in 2013, on the Swiss Unit label. The trio’s genesis goes back even further, as the material was recorded right at the close of 2011. “That was instigated by Wanja. We put the trio together and organised the recording session. Wanja was kind of short on material. He initially brought some tunes, but we were keen on adding material, as we all had stuff lying around that would fit that sound, and that energy. We started doing some good gigs with that first record, and in the process, writing for, and planning for the second disc. Then the opportunity to play with Peter Evans came up…”

The threesome were playing at the Bezau Beatz festival in Austria, where Evans was also booked to deliver a solo set. The promoter Alfred Vogel and Christian Lillinger came up with the idea of an amalgamation, and both parties were enthusiastic. “We came down a couple of days before the festival, did some rehearsing, both played our respective gigs, and then we had another three days, one to rehearse, and two to record the new material. It was a real instant vibe that we found together. We used material that we had initially planned to use for the trio, so it wasn’t new to us, but it was to Peter.”

The Amok Amor quartet album was released by Boomslang Records to coincide with the November 2015 tour. Speaking of that ripping Birmingham gig, delivered in-the-round, in a small theatre from which there was no escape: a large degree of improvisation was involved, and Evans in particular has long been accustomed to bolting from one composition to another, from his time with that other remarkable combo, Mostly Other People Do The Killing. Leaping right in, the horn players took extensive soloing time, not letting up on the high invention-flow for a second. Their object is to push themselves to the limit, testing breath capacity, fingering speed and idea-fishing to the maximum levels. As Lillinger threw drum-volleys across the already choppy surface, his collection of drumhead additions and tiny objects were impressively deployed, not only for small sounds, but also as part of a full, tonally-altered rotary rolling. 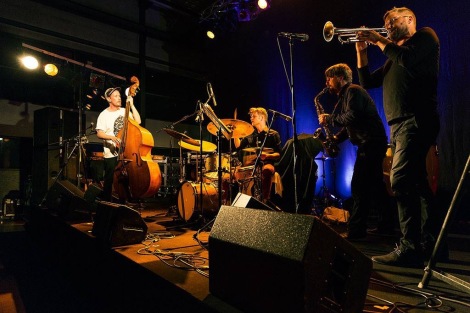 “The compositions have been using structures that were intended as improvisation templates,” Eldh reveals. “The form of the written material is suggesting a forum for improvising. Rather than having a fixed set-list, we’re using all of the material as a pool that we can dip into at any time. We try to segue into different parts of different tunes. One composition could be interrupted by going into a section from another piece. That’s a process that we’ve tried to evolve. Different tunes would have such a character where anyone could start it, with subtle and small musical cues. Everyone is so alert in this band, it’s so easy to instigate a sudden change in direction. The compositions, in themselves, they all have these sudden changes, abrupt mood-swings.”

Besides the inescapable Ornette comparison, this bunch prompted memories of the John Stevens Freebop outfit from the 1980s, in the way that they take bebop as a beginning, then pull out all its roots and re-plant in an unfamiliar, war-torn landscape. During that triumphant Birmingham gig, fluidity was constant, but with jarring swerves in course, Evans bringing in some military bugling influences, then proceeding to drone without remission, facilitated by his circular breathing skills. Such a layered plain came as quite a wide-vista surprise, placed in the midst of the majority Amok Amor sound of swinging skyscrapers, scurrying rodents, screaming motorists and deep subway rumbles. The quartet are the proud possessors of an epic density, and a hyperactive dash, always highly detailed, as they blasted flat out, skating across a dangerous forest of miniature spikes and spines.

Eldh and Lillinger have eventually gravitated towards being the chief composerly voices of Amok Amor, and are the ‘bandleaders’, although the unit does still project a collective aura. Peter Evans is a regular European visitor, nowadays, so the foursome getting together to play and record is not so much of a trial. The next album is booked to be laid down straight after their Moersfest performance, and will feature several Evans pieces, but all four members will ultimately be contributing. It will be another two-day session, hot off the Moers stage..!